Metaflow provides a client API that is used to inspect results of past runs. It is particularly well suited to being used in notebooks.

This document provides an overview of the client API. See the complete API in the Client API reference page.

Note that all operations in the Client API are filtered by the current namespace, as explained in Organizing Results. If you do not get the results you expect, make sure you are in the correct namespace. The Client API consults the metadata service to gather results, so make sure that the client is properly configured to use the correct metadata provider. 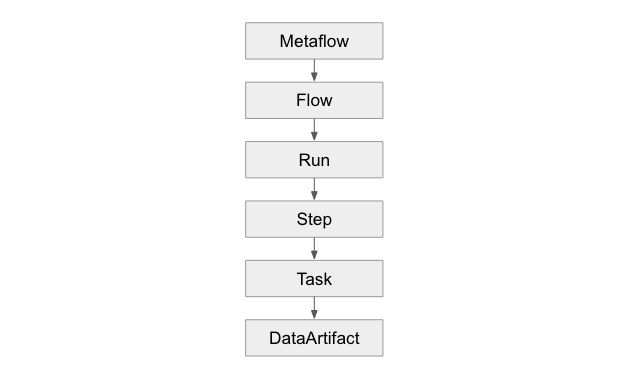 You can import any of the objects shown above directly from the metaflow package as follows (for example):

The root object, Metaflow, can be instantiated simply with

This is the entry point to all other objects. For instance, you can list all flows that have been run in the past with:

Every object listed above follows a consistent interface. All the operations below are available in all objects, not just the ones demonstrated.

You can list child objects of any parent object simply by iterating over the parent:

Expectedly, this works too:

You can access a specific child with square brackets, similar to a key lookup in a dictionary. Note that keys are always strings (even if they are numerical IDs):

Accessing a specific object by its address​

Besides navigating from the root downwards, you can instantiate every object directly with its fully qualified name, called pathspec. Note that also this operation is subject to the current namespace, as explained in Organizing Results; in short, you will not be able to access a Flow that is not the current namespace; the error message returned will make it clear whether an object exists and is not in the namespace or does not exist at all.

You can instantiate, for example, a particular flow by its name:

You can instantiate a particular run of a flow by its run id:

And every step in a run by its name:

One of the most typical use cases of the client API is to access data artifacts produced by runs. Each data artifact is represented by a DataArtifact object whose parent is a Task.

DataArtifact is a container object for the actual value. Besides the value, DataArtifact includes metadata about the artifact, such as its time of creation.

Often you are only interested in the value of an artifact. For this typical use case we provide a convenience property .data in the Task object. The .data property returns a container which has all artifacts produced by the task as attributes.

For instance, this the shortest way to access a value produced by a step in a run:

Here, we print the value of self.x in the step a of the run 2 of the flow DebugFlow.

New in Metaflow 2.7.1: You need to upgrade your Metaflow library and the metadata service to benefit from this feature.

Every run has a set of tags attached, that is, user-defined annotations. You can add and remove tags as follows:

This will print one_tag, another_tag, yet_another. Note that one_tag is added twice but since tags are a set, duplicates are ignored.

You can also replace tags with other tags:

The replace calls first removes the tags specified as the first argument and then adds the tag(s) in the second argument. Crucially, this is guaranteed to be an atomic operation: If another party lists the tags while replace is running, they won't see a partial state between remove and adds.

Note you can perform these operations also on the command line using the tag command, for instance:

In addition to user-defined tags, Metaflow assigns a handful of system tags to runs automatically. These tags can be used for filtering and organizing runs but they can not be removed or replaced with other tags.

You can see the set of system tags assigned to a run like this:

Or the union of system tags and user-defined tags like this:

Every object has the following properties available:

To access an iterator over runs and filter by tags, use the runs() method. See Tagging for more detail.

Flow has two additional properties related to determining the latest run for the flow. Note that any Run returned will be in the current namespace.

To access an iterator over the steps of a run and filter by tags, use the steps() method. See Tagging for more detail.

Run also has a few additional properties to make it easy to access commonly used information:

A Step typically has a single Task. A Step will have multiple Task objects as its children if it is a foreach step; each Task will correspond to a single execution of the Step.

To access an iterator over the tasks of a step and filter by tags, use the tasks() method. See Tagging for more detail.

Step has a few additional properties as well:

Since a Task is the actual unit of execution in Metaflow, these objects contain the richest set of properties:

Here is an example:

The Client API relies on a metadata service to gather results appropriately. Metaflow supports a local mode (.metaflow directory on your filesystem) and a remote mode.