Most Metaflow projects start as a simple Python script that is developed by a single data scientist. Metaflow takes care of keeping results organized automatically, so you can focus on developing models and the business logic around them.

Over time, the project matures to the point that you want to deploy it to AWS Step Functions or Argo Workflows to test how the model works with real-life, updating data. In Metaflow, this is a matter of executing a single command, step-functions create. Having the workflow run automatically with fresh data is a great way to surface unforeseen issues in the code.

After a few iterations, the workflow starts to work reliably. If the results are promising enough, stakeholders can start relying on the results of your workflow. Often, success attracts more developers to join the project. At this point, you will need to start thinking about how to coordinate work amongst multiple people and how to iterate on new, experimental versions of the workflow while providing stable results to your stakeholders. This is where the @project decorator comes in.

During development, multiple people can work on the same workflow simultaneously as Metaflow keeps executions isolated through independently stored artifacts and namespaces. However, by default, all AWS Step Functions deployments and Argo Workflow deployments are bound to the name of the workflow. If multiple people call step-functions create (or argo-workflows create) independently, each deployment will overwrite the previous one.

You can test this by executing the following flow.

Save the above snippet in a file, project_flow.py. Now you can run the flow as usual:

The @project decorator exposes new project-related attributes, project_name, branch_name, and is_production in the current object which you can use to alter the behavior of the flow depending on the execution context. Besides the new attributes in current, the flow works exactly as before when executed outside AWS Step Functions / Argo Workflows.

The main benefit of @project relates to deployments on AWS Step Functions and Argo Workflows. Next, we will cover its main use case: Managing a project with multiple developers collaborating.

On the AWS Step Functions UI, you would see one workflow called ProjectFlow:

The @project decorator adds a user-specific prefix in the workflow name: the workflow gets deployed with a name like example_project.user.YOURNAME.ProjectFlow where YOURNAME is your username. Metaflow gets the username by looking, in order, at the following environment variables: METAFLOW_USER, SUDO_USER, USERNAME and USER. 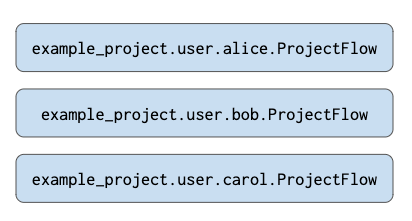 Note that each one of these deployments gets an isolated namespace and a separate production token. This means that if your code refers to Flow('ProjectFlow').latest_run on AWS Step Functions (or Argo Workflows), it is guaranteed to refer to a run that corresponds to its own isolated deployment. The deployments don't interfere with each other.

In addition to user-specific deployments, most projects have a single blessed production version which represents the official results of the workflow.

The @project decorator exposes a new top-level command-line argument, --production that denotes a production run or deployment. See what happens when you run ProjectFlow with --production:

You can deploy a production version to AWS Step Functions as follows:

or to Argo Workflows as follows:

Instead of deploying the flow with a user-specific prefix, this will deploy the flow as example_project.prod.ProjectFlow. You will get a warning about missing production token if you are not authorized to deploy the flow to production.

The production deployment gets a separate, isolated namespace of its own: 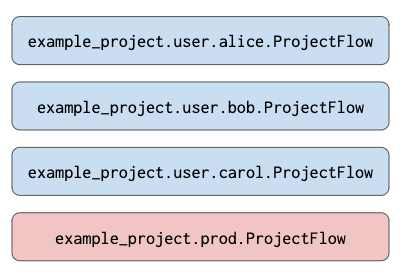 Imagine that ProjectFlow has a stable version in production. Now, Alice and Bob want to start developing a new, experimental version of the flow. They can work on a common codebase and run the code locally independently. Eventually, they will want to deploy the experimental version to AWS Step Functions (or Argo Workflows) and let it run in parallel with the production version for a while, to see that it works correctly.

The flow reports that the branch name is test.better_version. You can deploy the custom branch to AWS Step Functions:

which will result in another separate, isolated namespace: 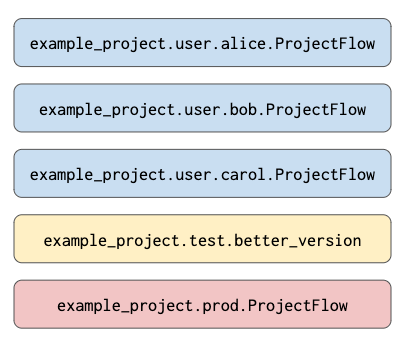 Alice and Bob can share the production token corresponding to the branch, so either of them can redeploy the branch when needed.

The flow reports that the branch name is prod.better_version. You can deploy the custom branch to AWS Step Functions:

The @project decorator makes available three classes of namespaces that will affect the behavior of step-functions create (and argo-workflows create):

Note that the isolated namespaces offered by @project work best when your code is designed to respect these boundaries. For instance, when writing results to a table, you can use current.branch_name to choose the table to write to, or you can disable writes outside production by checking current.is_production.